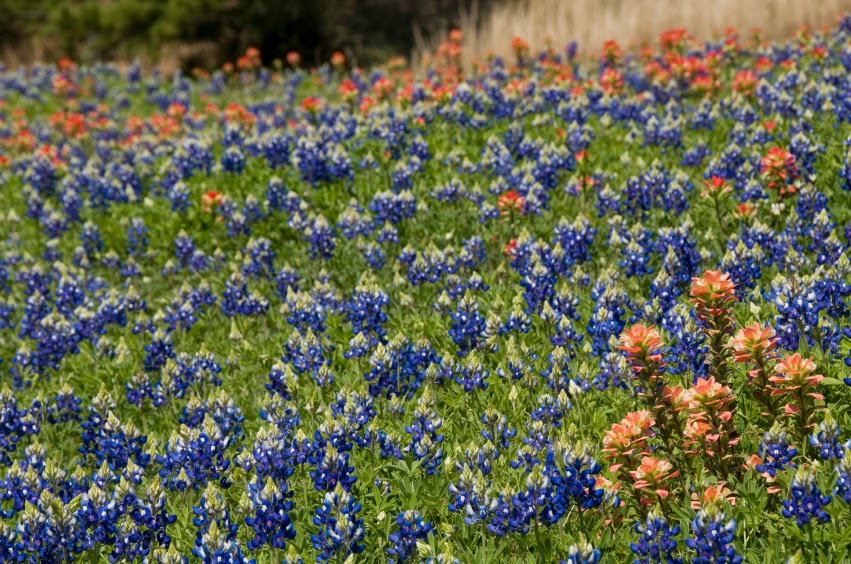 I know you don’t have eyes in the back of your heads and must check light meters and swap out camera lenses, but make sure there are no fire-ant mounds in the vicinity before you settle your infant amidst the foliage.

Daddies don’t park on the left shoulder of the highway. Yes, it’s the side closest to the flower-studded median, but it abuts the passing lane, and a lot of Texas drivers take a 75-mph-speed-limit as a suggestion meant for little old ladies from Louisiana, not us.

It’s bluebonnet season in Texas, and the sight of those perky blossoms in highway right-of-ways induces madness. That clot of cars up ahead doesn’t represent an accident. Instead, it marks the location of a particularly bright, wide swath of wildflowers.

Two Sundays ago, the people stopped by the side of the road ranged from teenage girls in dress jeans, nice tees, and stilettos to three-generation groups, to brand-new parents and their infants.

It’s a tradition in southeast and central Texas to pose babies among the bluebonnets. The same parents who painstakingly research safety ratings of car seats, strollers, and cribs go a little wild during spring wildflower season, park by the side of the highway, and carry their little ones up embankments and down gullies in search of the perfect bluebonnet-filled site.  For a few minutes, at least, mom and dad don't worry about outside threats like ticks, bees, and fur-covered critters. The bluebonnet’s a powerful draw.

Some of those parked by the side of the road pose for selfies while others set up cameras on tripods. Some bring props for their photo sessions: a guitar, dogs, hats of all kinds. Some dress to blend with the bluebonnets, while others aim for contrast.

The Texas Department of Transportation sows about 30,000 pounds of wildflower seeds along rights of way every year.

In a state sometimes wracked by partisan politics, we can all agree our wildflowers are gorgeous. Thanks, TxDOT.

Let's drive extra friendly during bluebonnet season. The camera-toting dude we have to swerve to avoid is in the grip of seasonal madness. He's got bluebonnets on the brain.

Hi Pat. The picture is beautiful. Some day I hope to see the amazing display in person. I will not, however, stop along the side of the road. I'm smarter than that.

Hi, Patricia,
Time your visit for late March-mid April. The flowers astonished me this year, especially the Indian paintbrush.

I hear you went to Disney and hope to read a post about your visit.

I knew Texas was big on wildflowers, but wow, some people take leave of their senses to get those photos! Good thing to know to watch out for them if I'm ever driving on one of Texas's wildflower-studded highways.

They experimented with wildflowers in the medians here in Ohio a while back, but only for a few years. Probably ran out of money. :(

When you were driving down Bloomfield Avenue from MSC did you ever think you would be writing about Texas bluebonnets one day? I always thought you liked the Cherry Blossoms in Branch Brook Park. This is what happens when you leave Jersey for too long a time.

Just kidding of course - great picture and I'm glad there is something all Texans can agree upon - we still can't find anything in NJ to agree upon or even like.

They really are beautiful! I hope to see them in person one day, hopefully not while rolling down an embankment. I consider myself warned. Thanks, Pat! :)

Hi, Jennette,
I'm sorry to hear Ohio cut its wildflower program. I bet your roads are safer in spring, though.

Hi, Patrick,
I love cherry blossoms, but there's no point pining for what doesn't thrive in this area. Right now, central Texas is ablaze in bluebonnets and Indian paintbrush, and I'm enjoying the view.

I used to drive home on Watchung Avenue and had my favorite gardens along the route.Did I ever think I'd end up in Texas. Nope. Never.

Hi, Coleen,
Glad to hear you're going to watch your footing. I'd love to see your photos of highway wildflowers, though. You have a good eye and an appreciation for out-of-the-ordinary beauty.

Beautiful picture, Pat! I'd love to have the opportunity to see these in person. Out by my mom's they have the poppy fields which create a similar problem. It's been years since I've stopped to see them. How I'd love to do it again. Years ago my mom and I took my son to an area off a side road where there wouldn't be any traffic concerns. You really need to be a local to know where such areas are to be found, though.