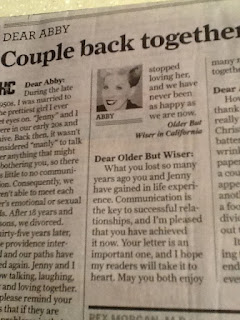 In the sixties, like every decade before and since, young girls who worried about a peeping-tom neighbor, fretted their parents' arguments would lead to divorce, or despaired of ever developing breasts could discuss their fears with a trusted adult. But what if the topic made both girl and adult tongue-tied? What if there were no trusted adults around? Where did that young girl turn for help?
Forget about advice-show television because it didn't exist. The Phil Donahue Show entered syndication in 1970. Sally Jesse Raphael made her TV debut in 1983, and The Oprah Winfrey Show aired in 1986.
Forget about Googling a question. The World Wide Web didn't come online until 1993.
Luckily, young girls in the sixties, me included, learned lessons in the school of life from the Friedman sisters: Eppie and Pauline, better known as Ann Landers and Dear Abby.
The sisters were in their thirties, married, and parents when they started their newspaper advice columns in the mid 1950's. In other words, they brought motherly instinct and experience to straight talk about subjects considered taboo in many families: sex, money, religion, and race.
They were conservative yet open-minded, tolerant but proper, compassionate but quick to pounce on the willfully clueless.
In most newspapers, advice columns ran in the same section as the comics, so generations of kids kept up with Archie and devoured letters from or about jilted brides, betrayed husbands, jealous co-workers, and nosy mothers-in-law.
Thanks to the Friedman sisters, a sheltered girl like me understood grown-up life could be complicated, unfair, and heart-breaking.
Last week, Dear Abby's Pauline Phillips died, a little more than a decade after her sister, Eppie Lederer/Ann Landers. Jeanne Phillips, Pauline's daughter, has written the Dear Abby columns since 2002 and will continue. Ann Landers' columns ended with Lederer's death in 2002.
One of my daughters claims Maury (Povich), Ricki Lake, and Montel Williams helped her develop street smarts. I thank Dear Abby and Ann Landers for mine.
Dear Abby's often repeated New Year's resolutions are here. In addition, readers of the New York Times share the most helpful advice they received from Dear Abby's columns.
Your turn: Who is your most reliable source of relationship advice?
Posted by Pat O'Dea Rosen at 8:40 AM

I loved her New Year's Resolutions. All great advice. I used to always read Dear Abby. I was sad to hear of Pauline's passing. Makes it feel like an era has passed.

Where do I get advice? Gosh, all over the place. I seize on all sorts of words of wisdom and inspirational quotes. Many from FB. I mean, those SomeeCards!! That's good stuff! ;)

I always read Dear Abby in the paper when I was a kid! But I guess I've always relies on friends for advice. Sometimes a good chioce, sometimes not. I remember my mom watching Phil Donohue! Do you know where he's from? :)

I loved Dear Abby and Ann Landers too. When I was in my 20s & 30's, I read the advice columns in Cosmo and Glamour--more for entertainment than advice. The headlines on some of those mags still crack me up, stuff like "Ways to Drive Him Crazy in Bed" or "What Men Wish Women Knew." Not sure whether it's good advice, but articles like that must sell magazines. :-)

I feel as if an era has passed, too, Ginger. I learned a lot from the Friedman twins.

I found out where Phil Donohue's from last night, Jennette, thanks to Google, my research assistant. His talk show originated in Dayton, too. How cool is that!

You're right, Lark, articles like "Ways to Drive Him Crazy in Bed" must sell magazines, but I don't understand why similar articles repeat themselves every six months. It's not as if a woman forgets what drives a man crazy.

Does a new readership come of age every six months?

"...Maury (Povich), Ricki Lake, and Montel Williams? I thank Dear Abby and Ann Landers for mine." I'm with you Pat. Isn't that interesting? I knew that Phil Donahue was from Ohio. But Dayton? Well, I see a new Monday post from Jennette Marie Powell. There's a lot of great stuff happening in her hometown. Who knew? :)

I loved Dear Abby. She was so common sense and so "do no harm."

Dear Abby wasn't syndicated in the paper we got when I was a kid (same era as you). Which was a shame because I liked her better than Ann Landers, who was in the Baltimore Sun. Ann could be a bit snarky at times.

I was grown before I knew that those weren't their real names and that they were sisters.

Even with the snarkiness, I loved reading either of their columns (sometimes because of the snarkiness). My all time favorite Ann Landers' response was to a reader who asked what to do about relatives who were obnoxious dinner guests. Her reply: Don't invite them to dinner.

Yes, feels like the end of an era to me too. I remember reading them and feeling like I was a part of something secret, sitting in on an important conversations, fears and worries.

I too loved Dear Abby and Ann Landers. When they finally appeared in our newspaper, the subjects and advice were often racy. If there was one thing I remember the most, it's that their columns were always entertaining. :)

we didn't have Dear Abby in the major paper in Calgary but I loved Ann Landers. she was an amazing source of information and set the standard for behavior. I was a Phil D devotee for years and years and years. he introduced me to the Chippendale's. sighhhhhhh

Karen, Jennette has convinced me that Dayton is a fascinating, happening place. I hope she does a blog entry on Phil Donahue.

I hear you, Liz, especially on the "do no harm" part. Some television shows seem intent on humiliating people with problems or forcing them to abase themselves before they're deemed worthy of help.

Hi, Kassandra! The Friedman sisters had a way of seeing through all our excuses and but, but, buts, didn't they?

Hi, Coleen! Yes to that feeling of sitting in on important conversation and on fears and worries that weren't my own yet could have been. It was poignant to know those letter writers turned to a stranger because they couldn't or wouldn't get unbiased advice from a friend or family member.

I'm laughing at your "racy" comment, Sheila. How many of us started reading advice columns when we were eight, nine, or ten? I didn't understand a lot of what I read but filed it away for future reference.

I, too, miss Ann Landers. I like what Jeanne Phillips has done with the Dear Abby column, and I also like a new-fangled advice columnist, Carolyn Hax.

Wasn't Ann Landers great, Louise. Do you channel her in your work as a therapist? I can't help but think that Ann Landers and Dear Abby helped form a couple of generations of writers, therapists, and customer-service superstars.